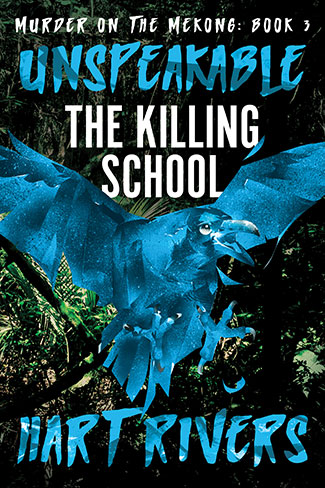 From the Author of UNBREAKABLE and UNKNOWABLE comes UNSPEAKABLE, the Third Installment in the Murder on the Mekong Series, the Final Riveting Journey Into the Perils of the Vietnam War.

A top CIA assassin turns on those who value him most, another killer finds it hard to kill upon discovering his heart, and a woman who once had a heart wonders how she lost it.

In the final days leading up to the end of the Vietnam War and the exodus of U.S. troops from Saigon, JD turns on his former employer, the CIA. But taking the moral high-ground may cost him in ways he could never have imagined.

Kate, the former mission nurse, marries the world's most powerful dirty diplomat and discovers too late that the path to redemption is quickly obliterated.

Izzy, a good man who lives to heal, must find a path for his own healing as he struggles with PTSD and the rubble that remains of his life. Must Izzy--and good men like him—become killers to stop those who kill without conscience?

. . . or will they become part of something UNSPEAKABLE?

What People are Saying

“What a roller coaster ride of a story...impossible to put down...everything a page turning book should be.”

“. . . dirty and gritty, showing a not often seen side of the Vietnam War.”